SUPOENAED TOO STRONG IN THE MILLIE FOX STAKES

Making her first start since disappointing in the Golden Eagle last October, the Chris Waller-trained Subpoenaed bounced back to form in Saturday’s $200,000 Group II Millie Fox Stakes at Rosehill Gardens. 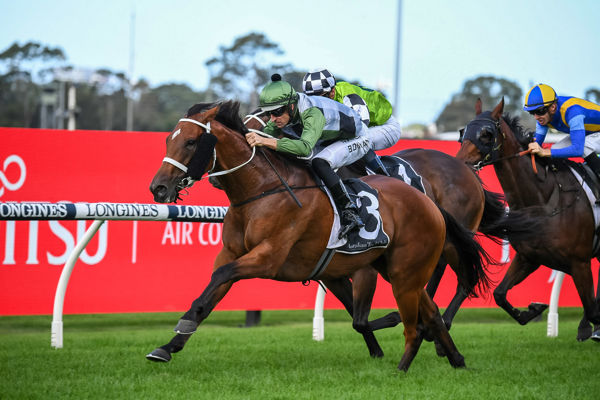 
Ridden by Hugh Bowman, Subpoenaed claimed her stubborn stablemate Madam Rouge (Zoustar) in the closing stages to win by three-quarters of a length with She’s Ideel (Dundeel) a length back in third.

A 4yo daughter of Rip Van Winkle (IRE), Subpoenaed advanced her record to five wins, three seconds a third from 18 starts with earnings of $541,002.

“It was a good effort. It means a lot for these mares that is for sure,” Waller said

“Hugh rode her well, nice and patient early, tracked into the three wide line which we’ve seen him do a few times before on wet tracks and kept the momentum going and pinched the winning break at the 200m mark.

Hugh Bowman said the mare benefitted by the size of the field.

“She was suited by the small field, her racing pattern in big fields makes it hard, because she does sort of need to settle, generally towards the rear to run her best races,” Bowman said.

“She usually hits a flat spot before getting into top gear, but I was able to just get her into a position right on top of the leading runners before I asked her to stretch, which is probably rare for her, but it just worked out well for her this afternoon.

“She has been a consistent horse who has raced at a high level all the time, her level often attracts big fields, today she’s found a smaller field, we all know she has the ability, she just need things to fall her way and she was fortunate enough that happened today.”

Purchased privately after making a winning debut at Te Rapa in April 2019 when trained by Tony Pike, Subpoenaed is out of the very talented O’Reilly mare Notice Received, a 5-time Melbourne winner, who was a $52,000 purchase at the 2014 Inglis August Thoroughbred Sale.